"This guy rocks the hell out of his guitar!"  - Lee

I have been playing guitar for many years, my guitars are my friends, & music has helped me through many hard times. Music is a way that I can express what's in my heart & soul, I hope everyone enjoys the music I have on here.

Also soon out a split7" with Durban Poison
and a comp-lp with 9 Canadian bands both on Shake!
http://www.experienceshake.com/

Low on tour in Europe

We've been busy over the last few weeks driving around America. Thanks to everyone who has come out to the shows. Here are a few of the sessions we've done in the last couple months if you missed them:

the following bands are involved.  It's also a beautiful show because it is so diverse, yet, Lee pits a Irish rock a billy thing against a German stoner thing..  Yea folks, just why Pluto Radio is different from your corporate mainstream bullshit!

This show is currently up and will play throughout Wed, April 24th.  Thank you all for listening to a thing that's outside of the loop!  )Lee-

The Headons have jumped into the commercial free Pluto Radio stream ..

Also soon out a split7" with Durban Poison
and a comp-lp with 9 Canadian bands both on Shake!
http://www.experienceshake.com/

Soggy Bog has done shows for us at the commercial free Pluto Radio stream in the past.  An amazing host to say the least!  -  Lee.

Thank you, The PodOmatic Team

Please address questions regarding this message to care@podomatic.com. 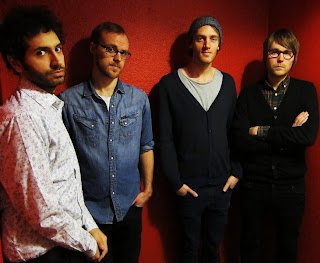 The Search appeared on the Swedish independent music scene in 2003. Their first full-length album, the eponymous The Search, was an original take on the lush, atmospheric sounds of 80’s pop and post punk. The album was distributed by Red Sun Records and ended up as No.1 on their best sales chart for almost 3 months. A European tour followed with live gigs in the U.K., Germany, Holland, and Denmark.
In 2006, the EP compilation Bloodbathe/Bazaar of Lush Loose Limbs was released, a record which saw the band stretching the somewhat dark sonic landscapes of their earlier recordings into new territory. This was followed by a year spent working on their 3rd album, Deranged Minds Unite, which was released by Lonaly Records and had a lighter, more lo-fi sound than previous recordings. (as compiled on the bands website)
Read more:  www.reverbnation.com/thesearch

Posted by Stalker Kimmy at 7:02 AM

Kelley Vice brings together diverse elements of acoustic rock, jazz, and innovative technique in an unconventional style rich with modal tunings, vibrant melodies and passionate vocals. Influenced heavily by James Taylor, the late Michael Hedges, Chris Cornell and Dave Matthews, Kelley's songwriting is evocative and painfully honest, conveying a depth of emotion that keeps listeners coming back for more.Kelley's music encompasses a wide spectrum of style and emotion, ranging from the explosive "Give In" to the haunting statement of "I Can Still Fall". His instrumentals move easily from dark sensuality to playful innocence. Though all are executed with the same unique character developed over two and a half decades of performance, no two songs are alike. (as compiled on this artists web site)

Posted by Stalker Kimmy at 6:45 AM 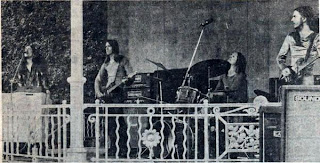 The Mynd were a Prog Rock band based in the North East of England. Formed in 1969 and after a few line-up changes, split in 1979. They played mainly in the Durham area, ventured down to London a few times and toured in Holland and France. The band never released any albums but did record some songs (in the mid-seventies) with Peter Bown a sound engineer from Abbey Road who's credits included Pink Floyd's Piper At The Gates Of Dawn and The Beatles Let It Be to name but two. (as compiled on the bands website)

This is an email to let you know that we have show coming up this week with Love666 at Webster Hall Studio.
You can get tickets and get more info here:

Posted by PlutoRadio at 2:30 AM 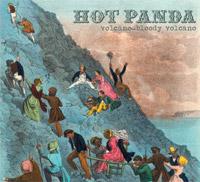 Hot Panda have literally driven four tour vans into the ground. They have taken their ferocious live show across North America over 10 times, as well as completing a tour of Europe in 2009 (opening for notorious Detroit rockers The Von Bondies), and a second tour of Europe in the fall of 2011 playing the Reeperbahn festival in Hamburg (as well as dates in France, Austria and the UK). The band has played some of North America's premier showcase festivals, including South By South West in Austin (where they were selected by Esquire Magazine as one of fifteen hot new emerging artists of the 2011 festival), CMJ Music Marathon in New York City, Pop Montreal, Canadian Music Festival and North By North East in Toronto, Sled Island in Calgary, and Halifax Pop Explosion. They've also been happy to share the stage with bands such as Art Brut, The Raveonettes, Grimes, Chad Van Gaalen, Tokyo Police Club, Electric 6, PS I Love You, Julie Doiron, Women, You Say Party!, and many more. (as compiled on the bands website)

Posted by Stalker Kimmy at 6:42 AM


UNSUNG 413  POOLSIDE PLANO - Mr. Thomas Trapp.  This show is currently up on the commercial free Pluto Radio stream in a three hour rotation until the end of day Thursday, April 11th.

"thanks Thomas for another great radio show... "
Lee -
Posted by PlutoRadio at 3:14 PM 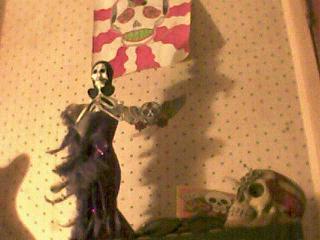 Freak Out With The Psychotomimetic Sounds Of 'Al Hotchkiss' A Down And Dirty Lo-Fi Patchwork Intensification Of Psychedelia, Garage And Surf Reverberations.With influences such as Link Wray & 13th Floor Elevators Al Hotchkiss has created uncommon devious music with the emphasis on playing from the heart in a conscientious and concerted effort to formulate an affinity with you and perchance set the windmills of your mind turnabout in the process. (as compiled on the bands website)

Read more:  www.myspace.com/alhotchkiss82
Posted by Stalker Kimmy at 6:23 AM

OWEN TEMPLE
DOLLARS AND DIMES
North America is many different places. Of course, there are different states and different provinces, but that’s not really where the big differences happen. The really fundamental distinctions happen between the different regions.

One great thing about my job is I get to travel. Mostly on the highways, and frequently from one end of the country to the other. When I get to see how the different regions fit together, how they unroll from end to end, that’s the most interesting travel. Occasionally, if the booking agent is sadistic enough (or optimistic enough?), I get to see three or four different regions in three or four days.
I’ve been traveling, playing gigs, and making records for twelve years. The place where this started for me was Austin, playing at a dark wooden barroom downtown called O Henry’s Back Forty (now the site of the downtown Hilton). I’ve worked different jobs, lived in Houston, Dallas, New York, and Madison, Wisconsin, and made good friends in all those places.
A fellow traveler and songwriter, Brian Rung,  (per Mr. Temple's website.. http://www.myspace.com/owentemple)

Pas of Era on Pluto Radio .

Like all music you and I have ever enjoyed, Pass of Era seeks to move you from this world into the visceral realm of human emotion - a place where you can fully immerse yourself in a journey that builds it's own reality as time moves forward. That feeling of discovery and passion is why we are here - to write - to perform - to listen - to share. This is the world built by three young musicians from Edmonton, Alberta. This is the story of Pass of Era.
The group is currently nearing the release of their debut EP titled "The Scripted Dream" (slated for a January, 2011 release) whilst beginning work on their first full length concept album and preparing to hit the scene and bring their story to the stage. (per the band's webpage)

Plastique Noir is a Brazilian gothic/post-punk band born in the end of 2005/beginning of 2006 at Fortaleza-CE-Brazil, whose current members are Airton S (voice/electronics), Márcio Mäzela (electric guitar) and Danyel (bass/guitars). Suddenly it got notoriety at its homecity, where its gigs became habitual in the main local nightclubs and festivals. It has been invited yet in its early months for doing the opening act for Cruxshadows (USA) Brazilian Tour and other performings through several Brazilian states.

A loner making genuin garagerock. Now go and check it out on Soundcloud! www.soundcloud.com/haubits

(as compiled on Mr. Fradkin's official webpage)  Les Fradkin is a 21st Century Composer / Innovator on the Starr Labs Ztar and a virtuoso MIDI Guitarist. Classic Rock and original music repetoire meets 21st Century hi Tech electronics in a Progressive, Classic Rock and Crossover format featuring brand new two handed tapping and strumming techniques for Classic Rock and Symphonic Crossover music.
Les Fradkin is one of the Original Cast members of the hit Broadway show "Beatlemania", He plays the Starr Labs Ztar, 12 and 6 string guitar and Keyboards and has been a One Man Band on almost all of his solo CD's. He was a Guitar Synthesizer pioneer of the 1980's, a neo classical guitar trendsetter in the 1990's and is now a 21st Century electronic music innovator and composer for Guitar Synthesizer and MIDI Guitar. A classically trained musician as well as being a rock guitarist, he has found success as a recording artist, composer and producer with MGM Sunflower, ESP-Disk, Bell, Arista, RCA, and Laurie Records. Les has written the well known French hit "La Chansons Des Souvenirs" ("Song Of A Thousand Voices") for the famous French songstress Mireille Mathieu and the Latin Pop icon Roberto Jordan ("Donde"). He was originally discovered and signed by John Hammond Sr. at Columbia back in 1969. He has played Mellotron, 12 and 6-string Guitar, Bass and Piano on dozens of Top 40 hit records throughout the early 1970's , scoring many US and UK chart placings throughout his career.  (continue reading.. http://www.lesfradkin.com/bio.html

Dexter Jones' Circus Orchestra was formed 2001 in Umeå, Sweden by Tia Marklund, David and Daniel Israelsson, Håkan Dalsfelt and Kent Jonsson. The debut record “The Losers are Back in Town" was recorded in 2003 and released by Freebird Records as a 7” vinyl.
The album received extremely good reviews from stoner rock circles. The work with a fullength album started shortly after and the self titled debut (on Freebird Records) was presented in 2004, containing 10 dynamite songs. Slowly things started to happen. DJCO was booked at Eurosonic Festival January 2005 and toured mainland Europe twice, at times, together with the cult band Hypnos 69. The s/t got great reviews and was even titled ”the album of the year” by some of the leading European rock magazines. The songs could also be found on a few compilation records such as “The Ultimate fuzzcollection” (Fuzzorama Records). CONTINUED TO BAND'S FACEBOOK .. https://www.facebook.com/circusorchestra/info