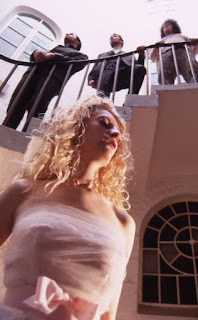 UK band COLT began as writing duo Living With Eating Disorders; Andrea and Jared met in a west London recording studio and on the strength of demos attracted the interest of legendary producer John Fryer.  In August 2004 they released their debut EP ‘White Like Snow’ and the end of 2004 saw the band support ‘Psychic TV’ and ‘Whitehouse’, but increasing pressure forced the band to withdraw from the public eye and on the 16th March 2005 LWED performed their last gig - a multi media gallery project ‘parliament of monsters’, with live sets, projections and sculptures.  Keen to move beyond the controversy surrounding the name, the band returned in October 2005 as Colt, to release their debut album 'These Things Can't Hurt You Now, So Throw Them In The Fire' on Halloween to critical acclaim from the independent worldwide press.

In May 2008, After a change in the live line-up and a change of label, Colt released the new EP "You hold on to what's not real", featuring four new tracks, and remixes by artists including Arlen Figgis and William Bennett, on their own label Obvious Records along with the video for 'Black Rabbits'.  In September 2008 Colt re-released 'These things can't hurt you now, so throw them in the fire' through Obvious Records. The album includes bonus tracks 'Arm' and 'Lullaby Remix' by Arlen Figgis featuring Mike Figgis on Trumpet, from the LWED EP 'White Like Snow', and the previously unreleased 'Gag Reflex'.

Colt are currently in the studio writing an album. (as compiled on the bands website)

Read more: www.myspace.com/coltmusic
Posted by Stalker Kimmy at 6:54 AM