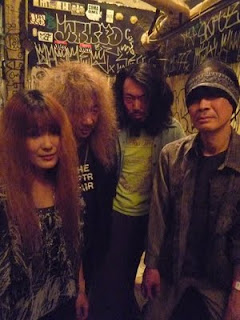 MARBLE SHEEP were founded in 1987 by Ken Matsutani(ex WHITE HEAVEN). First the band started its musical activity under the name of "MARBLE SHEEP & THE RUN-DOWN SUN'S CHILDREN." The good old MARBLE SHEEP passed through many styles of psychedila like Minimal Music, Heavy Rock and S.F. Jam Psych as both band and music continued to evolve.

The name MARBLE SHEEP is highly esteemed overseas as a fixture of the Japanese rock scene since early times.  MARBLE SHEEP started their real overseas activity from 2002. They obtained overseas record company deals too and had many live shows in USA and Europe. In contrast with the long history of the band, MARBLE SHEEP are described as "Merry Pranksters of the 21st Century." This can be attributed to the merry and energetic live performances which can flip out even full-grown-ups while taking listeners to the Space World easily.

So, eternal 21st Century boys & girls, We wanna be your SNAPPY TOYS!!!! (as compiled on the bands website).
Posted by PlutoRadio at 3:00 AM