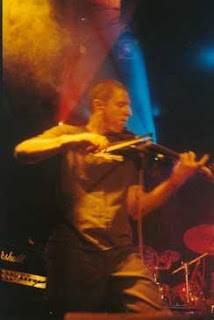 As a third generation violinist, James has been classically trained since the age of 4. Despite this classical upbringing, James is inherently drawn to Alternative Rock, Progressive Rock, Fusion, and Electronica – influenced by bands ranging from Nine Inch Nails, Jane’s Addiction, Chemical Brothers, and System of a Down to Mahavishnu Orchestra, Pink Floyd, and King Crimson.

James has adapted his classical training to significantly change the violin’s sound, capabilities, and applications and has been influenced specifically by rock guitarists. These influences include Jimi Hendrix, Vernon Reid, John McGlaughlin, and Dave Navarro.  Playing through a Marshall half-stack amplifier, James uses a combination of sounds ranging from clean melody lines to heavy rhythm sections to completely altered and distorted feedback and sound effects (all as compiled from the James Sudakow's website).

Read more: http://www.evexp.com/
Posted by Stalker Kimmy at 4:36 AM